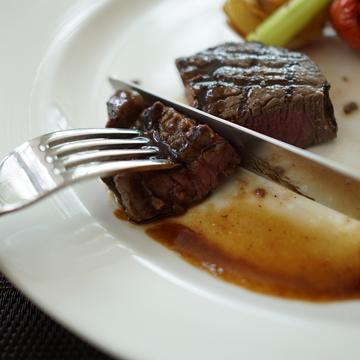 People who eat red and processed meat within department of health guidelines are still at increased risk of bowel cancer, according to a study jointly funded by Cancer Research UK* and published today (Wednesday 17 April) in the International Journal of Epidemiology.

One in 15 men and 1 in 18 women born after 1960 in the UK will be diagnosed with bowel cancer in their lifetime. This study found that risk rose 20% with every 25g of processed meat (roughly equivalent to a rasher of bacon or slice of ham) people ate per day, and 19% with every 50g of red meat (a thick slice of roast beef or the edible bit of a lamb chop).Scientists have shown that people eating around 76g of red and processed meat a day - which is roughly in line with government recommendations - still had a 20% higher chance of developing bowel cancer than those who only ate about 21g a day.

Cancer Research UK’s expert in diet and cancer, Professor Tim Key, who co-authored the study and is deputy director at the University of Oxford’s cancer epidemiology unit, said: “Our results strongly suggest that people who eat red and processed meat four or more times a week have a higher risk of developing bowel cancer than those who eat red and processed meat less than twice a week.

“There’s substantial evidence that red and processed meat are linked to bowel cancer, and the World Health Organisation classifies processed meat as carcinogenic and red meat as probably carcinogenic – but most previous research looked at people in the 1990s or earlier, and diets have changed significantly since then, so our study gives a more up-to-date insight that is relevant to meat consumption today.”

Prof Key and co-authors Dr Kathryn Bradbury and Dr Neil Murphy studied the diets of nearly half a million British men and women, aged 40 to 69 when the research began, over more than five years – during which time 2,609 of them developed bowel cancer.

Existing evidence points to an increased bowel cancer risk for every 50g of processed meat a person eats per day, but this research found that risk increases at just 25g per day, showing a similar rise in risk at smaller intervals. This is one of the largest single studies in the field and one of few to measure meat quantities and associated risks so precisely.

Dr Julie Sharp, Cancer Research UK’s head of health information, said: “The government guidelines on red and processed meat are general health advice and this study is a reminder that the more you can cut down beyond this, the more you can lower your chances of developing bowel cancer.

“This doesn't necessarily mean cutting out red and processed meat entirely, but you may want to think about simple ways to reduce how much you have and how often. Although breaking habits we’ve had for a long time can be hard, it’s never too late to make healthy changes to our diet. You could try doing meat free Mondays, looking for recipes using fresh chicken and fish, or swapping meat for pulses like beans and lentils in your usual meals.”