Fresh Start: A framework for healthy and sustainable diets 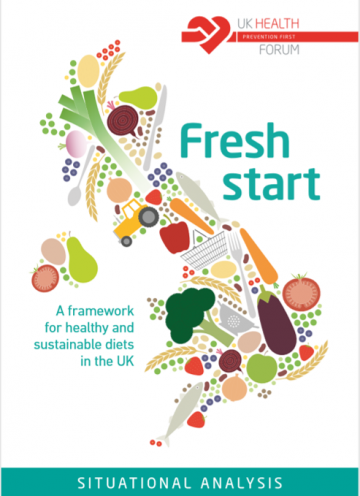 Fresh Start: A framework for healthy and sustainable diets

The UK Health Forum today released a new report, Fresh Start: A framework for healthy and sustainable diets. This report lends weight to calls for the UK Agriculture Bill – which was announced last week – to ensure that future agriculture policy supports improvements in human health alongside the welcome focus on better environmental outcomes. This is because the agriculture and food system costs the economy £45 billion every year from food-related conditions such as obesity and diabetes.

The three-part report* comprehensively examines current patterns of food and alcohol production and consumption, assesses how they compare to official recommendations, and their impacts on health and the environment. An international review of forty farm-to-fork actions that have been proposed or implemented around the world was consulted on with stakeholders, and the priorities outlined in a  10 point frameworkof recommendations.

Among the report’s key findings are:

The priority recommendations in the report include:

Electronic versions of all three reports are available on their website www.ukhealthforum.org.uk.