It’s not just cancer: regular meat consumption is associated with a wide range of common diseases 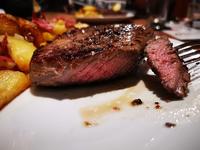 Results from our latest population-level study show that regular meat consumption might be associated with the risk of many diseases that we haven’t previously considered.

High intakes of red and processed meat have repeatedly been associated with an increased risk of colorectal cancer. But less is known about other potential health impacts of meat consumption  My colleagues and I at the University of Oxford’s Nuffield Department of Population Health have published a study in BMC Medicine that examines associations between meat consumption and 25 common non-cancer diseases.

Our research was based on data from almost 475,000 British adults participating in the UK Biobank. At the start of the study, each participant completed a questionnaire which assessed their dietary habits (including meat intake), after which they were followed-up for an average period of eight years. We monitored for 25 major causes of non-cancerous hospital admissions, using data from the NHS Central Registers.

Overall, participants who consumed unprocessed red and processed meat regularly (three or more times per week) were more likely than low meat-eaters to smoke, drink alcohol, have overweight or obesity, and eat less fruit and vegetables, fibre, and fish.

Even when we took these factors into account, our results showed that regular meat consumption was positively associated with a range of diseases. In particular:

What does this mean for the public?

Our results indicate that people would do well to limit their intake of red and processed meat. The World Cancer Research Fund recommends that red meat consumption be limited to no more than three portions per week, with a portion being around 350–500g cooked weight in total, and processed meat should be eaten rarely, if at all. Moreover, since BMI was found to have a strong effect on some of these associations, this study reinforces the message that one of the best things people can do for their health is to maintain a healthy weight.

We also saw that those who do not eat meat may be at a higher risk of iron-deficiency anaemia, and this is supported by studies elsewhere. Meat, particularly red meat, is a rich source of iron that is easily absorbed by the body. Plant-based sources of iron are less easily absorbed, therefore vegetarians and vegans should carefully choose foods that provide enough iron or take an iron supplement to ensure they obtain an adequate level.

More research is needed to establish whether these differences in risk are directly caused by meat consumption, or if other factors are causing these associations. If eating meat is found to be the direct cause, the task will then be to model the extent to which these diseases could be prevented if the general public decreased their meat consumption.

The full study has been published online in BMC Medicine.