LEAP teams up with New Scientist on Veganuary experiment!

When New Scientist magazine approached our team to get involved with their small Veganuary ‘experiment’ I was excited! Their idea was to ‘self-experiment’ and for some of their staff to try a vegan diet for a week. It seemed a great opportunity to work with the lovely people at New Scientist and to apply some of the research we’ve been doing in LEAP, so that people could learn more about the health and environmental impacts that the dietary changes could lead to.

I’m sure many of you have heard of, or even taken part in, Veganuary. This social campaign, led by a non-profit organisation, started in 2014 and  encourages people all over the globe to try veganism for a month. In 2019, more than a quarter of a million people took the pledge to go vegan for January, and the numbers are picking up year on year.

What did we do with New Scientist?

Nineteen of the New Scientist staff (13 meat-eaters, 3 pescetarians and 3 vegetarians) went vegan for one week to explore what effect, if any, this had on their health and the environment. All participants kept food diaries on My Fitness Pal for two weeks: the first week they ate their usual diets and the second week they tried to go 100% plant based. Analysing their diaries is where my colleagues at LEAP and I, come in.

So… did their health blossom with the new diet?

I looked at how the nutritional composition of their diets changed when following a vegan diet. The results were pretty interesting and similar to changes our researchers are seeing in long-term vegans.

Unfortunately, My Fitness Pal didn’t measure some key nutrients, such as Vitamin B12, iodine and selenium, which are likely to decrease when you reduce consumption of animal products. That’s why long-term vegans are encouraged to take a B12 supplement.

We know that there is an increasing body of evidence indicating high intakes of red and processed meat are associated with some adverse health effects, such as an increased risk of developing cardiovascular disease and some forms of cancer. The nutritional changes seen in this trial are mostly very positive, but being vegan for only one week isn’t enough to make a significant change in the chances of developing obesity or diet-related disease, such as cardiovascular disease or cancer, which reflects our dietary habits over a lifetime.

How about the environment?

Livestock production negatively affects the natural environment in various ways, especially as a result of greenhouse gas emissions and we know that reducing meat consumption can bring environmental benefits.

The results showed that when participants waved goodbye to meat and dairy, on average the greenhouse gas emissions associated with their food choices dropped by more than half. Taking a closer look, we saw a drop of 56% for the meat-eaters over the week, 45% for the pescetarians and 42% for the vegetarians. For vegetarians who went vegan, the reduction in greenhouse gas emissions was mostly due to avoiding cows’ milk and cheese and choosing plant based milks or vegan cheese alternatives instead. 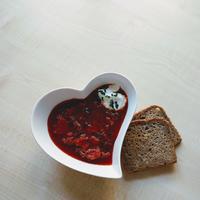 What did we learn?

Although this was only a small study of 19 people, the outcomes here reflect the theoretical calculations that can be made about the benefits of adopting a plant-based diet. Reducing the amount of meat in our diets and consuming plant-based sources of protein is a good thing for our health and our planet; the challenge for the volunteers in this study was how to keep it up?

But ‘going vegan’ for even just a week encouraged people to try new foods and most planned to try some form of ‘veg*ism’, whether as flexitarians, adopting ‘Meat-free Mondays’, or resolving not to cook meat at home but to eat it only when provided by others.

Perhaps more than anything, running the experiment helped spark conversations among staff at New Scientist about meat, health and the environment. We hope this will spark a much broader conversation among their readers too. This is the kind of engagement we try to foster through our LEAP programme so that more people make more informed choices about what to eat.

Here's what Mike Clark and Keren Papier, both postdoctoral researchers in the LEAP programme, who were also involved in the New Scientist self-experiment have to say: