We need a green recovery after COVID-19, but banning wildlife trade could do more harm than good

This article was originally published on The Conversation.

After several early cases of COVID-19 were linked to a wet market in China, wildlife trade became central to discussions about links between public health and nature.

Some groups called for complete bans on consumption and trade of wildlife, with some governments, like China and  Vietnam, acting decisively to introduce large-scale prohibitions.

The pandemic has brought humanity’s strained relationship with nature into sharp focus. It’s drawn public attention to links between environmental and human health, and led to calls for a “green recovery” that puts the environment at the heart of post-pandemic stimulus packages.

But the more pervasive environmental and health risks from animal agriculture – which would likely replace wild meat – have received little attention. My colleagues and I conducted a study to investigate the risks of removing wild meat from global food systems.Our results indicate that large-scale prohibitions on wildlife use could have negative consequences for nature and human health.

While some wildlife trade drives biodiversity loss and increases risks from emerging infectious diseases (EIDs), these pale in comparison to the impacts of animal agriculture.

Wildlife trade has been implicated in deadly disease outbreaks such as ebola and  SARS, with primates, bats and carnivores being high-risk species. But global analyses of EID events show that land-use changes, especially for agriculture, are the most significant drivers of zoonotic outbreaks, with more than half of zoonotic EIDs associated with agricultural expansion and intensification.

Human expansion into natural areas carries a greater risk of diseases crossing from wildlife into livestock or people, because of a greater proximity between the two. Most zoonoses – pathogens that spread between animals and people -– are transmitted through livestock, and declines in diverse natural ecosystems help the spread of these pathogens. Modern intensive animal production creates perfect conditions for development of virulent strains with pandemic potential, such as animal influenzas like “bird flu” and “swine flu”.

While roughly 3,000 species are threatened by direct exploitation, like hunting and fishing, wildlife trade is not ubiquitously bad. Some forms of well-managed wildlife trade can be beneficial for nature. Bighorn sheep in Mexico and  crocodiles in Australia are two examples of this. In some cases, like  wild deer in the UK, wildlife trade can be a fundamental part of ecosystem management.

On the other hand, habitat destruction and degradation, driven by agricultural expansion, is the greatest threat to wild species globally. Over 13,000 speciesare currently threatened by agricultural land clearing and degradation alone, with future global food production on course to drive huge wildlife losses by 2050.

A narrow focus on wildlife trade may do more than just distract from more pressing concerns. Our study found it could create further risks for nature and human health.

Wildlife is an important food source in many parts of the world, including North America,  Sub-Saharan Africa and China. Heavy-handed restrictions on its use will leave a “nutrition gap” – reduced supply of important nutrients, such as protein and B-vitamins. This gap will either be filled, most likely by increased production of domestic livestock, or people will go hungry. Both scenarios could exacerbate environmental and human health risks.

Since animal agriculture is a major driver of biodiversity loss and EID risk, any increases in domestic livestock production may have serious consequences for nature and public health. For example, we conservatively estimate that over 450 million kg of protein would be needed each year to replace wild meat consumption globally.

This would require more than 124,000 square km of additional agricultural land globally (that’s more than 23 million football pitches - an area almost the size of Greece). This could drive hundreds of species towards extinction, particularly in Latin America, Sub-Saharan Africa and the USA. This may also bring elevated EID risks, which would be highest in biodiverse forest regions – which includes many of the countries where wild meat bans could lead to highest levels of agricultural expansion.

But if wild meat was not replaced by livestock, millions of people could be left food insecure. Estimated per capita protein intake could fall below healthy levels in several countries, which could result in increased prevalence of chronic health issues related to malnutrition. This harsh reality, and limited viable alternatives, mean that the costs of halting wild meat consumption will simply be too high for many people.

Previous experiences in West Africa and Vietnam suggest prohibitions can lead to the creation of informal networks of wild animal trade, with poorer monitoring and higher public health risks than legal trade.

A truly green recovery, which can save wildlife and prevent future pandemics, requires broader scrutiny of global food systems. This should include risk based regulation of wildlife trade, as well as change in the agricultural sector.

Taking care of environmental and human health requires all of us to change what we eat and how it’s produced - especially with reductions in meat consumption in wealthy countries. Rather than acting as a cue for more scapegoating of those who hunt and eat wildlife, this is the urgent need that COVID-19 underlines. 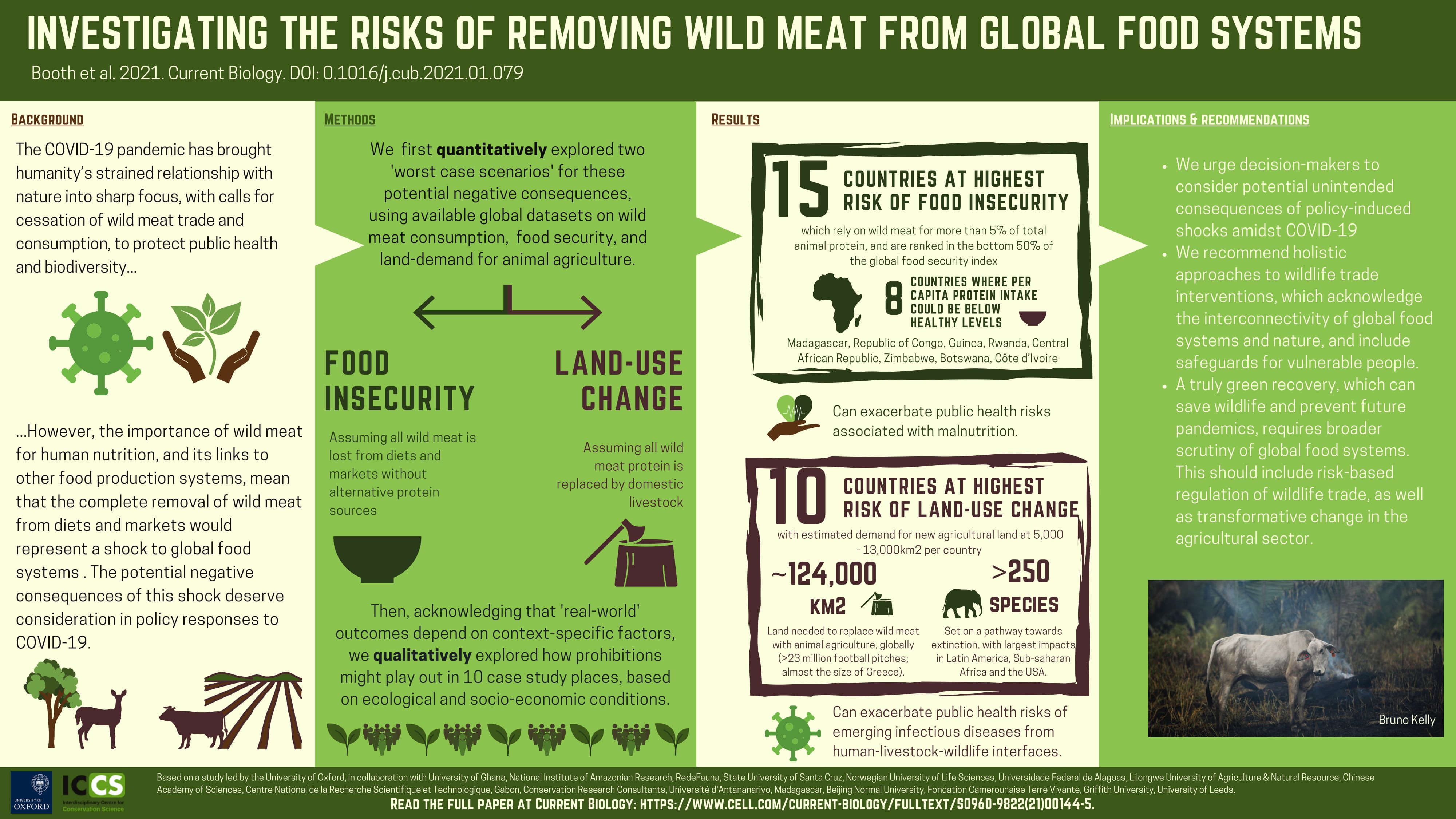