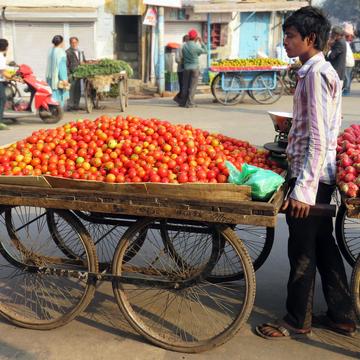 The STFC Food Network+ www.stfcfoodnetwork.org/ is a 700-strong interdisciplinary network bringing STFC researchers & facilities together with research & industry in the agri-food sector, in a community working to provide a sustainable, secure supply of safe, nutritious and affordable high-quality food, using less land, with reduced inputs, in the context of global climate change and declining natural resources. The network has secured funding now until Dec 2023 and is entering into its second phase under the leadership of Dr Sonal Choudhary. STFC Food Network+ - SFN (Phase 2) aims to address challenges related to Global Food Security with help of STFC and interdisciplinary research capabilities of the network. The SFN (Phase 2) will bring together researchers, industries and policy makers from both UK and international countries to co-design impact-led projects.

“TRANSSITioN” is one of the many projects in the network funded by STFC-GCRF, co-directed by Sonal and Bryan Shaughnessy in RAL Space  -  aimed at improving the food supply chain in India, which at one end sadly has farmers unable to make ends meet and committing suicide, and at the other end food poverty, while in the middle, vast amounts of beautiful produce go to waste due to shortcomings in the supply chain, with all the attendant waste of resources and consequences for the environment. Sonal’s success in securing funding for the TRANSSITTioN project follows a SFN scoping study she led, with extremely successful workshops in Sheffield and Delhi bringing together farmers, entrepreneurs, scientists and representatives of government in India.

This talk is organised by the Harwell Green Club, to join 170 kindred spirits go to LinkedIn and help stay informed https://www.linkedin.com/groups/8529608